A broken slab of stone unlocked the secrets of ancient Egypt 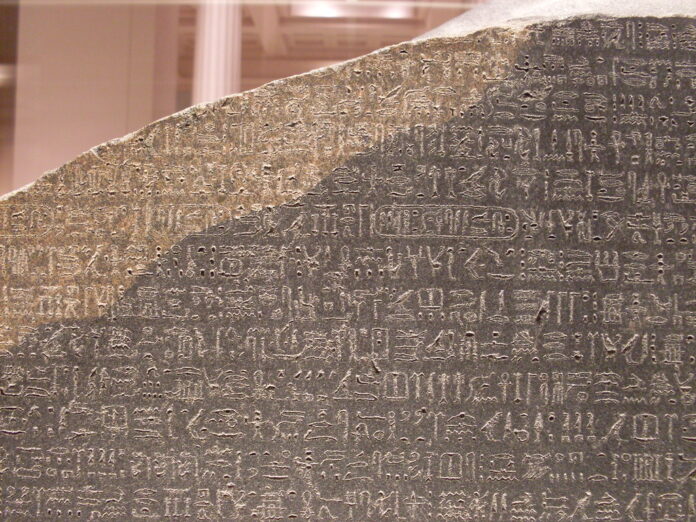 Ancient Egypt exerts a powerful pull on the imagination of every generation, refusing to stay buried in the past.

But much of what we now take for granted about this world of mummies, pyramids and tombs had for centuries remained shrouded in silence until French soldiers stumbled upon a broken slab of an inscribed stone in 1799.

The artifact depicted three different ancient scripts. Found while Napoleon’s army was digging the foundations of a fort in Rosetta, now El-Rashid, Egypt, the stone provided the key to decoding hieroglyphics — the ancient Egyptian writing system — and unleashed the secrets of one of the world’s oldest civilizations.

Back then, no one could read the neat pictures and symbols carved into stone and painted on papyrus scrolls discovered in temples along the Nile — although medieval Arab scholars and Renaissance-era travelers had long found them a source of fascination.

The importance of the engraved slab was immediately recognized, even by the soldiers, Egyptologist Ilona Regulski said. She’s the curator of a new exhibition at The British Museum in London that explores the race to decode the Rosetta stone and celebrates the 200-year anniversary of the breakthrough.

Under the terms of Napoleon’s defeat in the region, British forces shipped the slab, made of a dark, granite-like stone known as granodiorite, to Britain and it arrived at The British Museum in 1802. Casts were made and shipped to Egyptologists across Europe — an early attempt at crowdsourcing.

“Within two years after the discovery of the stone, every European country had possession of a copy of the stone. And that was a conscious process by scholars to distribute the text, because everybody wanted to speed up the process,” Regulski said.

“I think for many scholars at the time, it didn’t matter who was going to be the first as long as this was done, because there was the hope that would give so much information about ancient Egypt, which turned out to be correct.”

However, the quest to untangle the ancient script took two decades of detours down linguistic cul-de-sacs — an eon in the age of Google translate.

“If you look at the notes, and this was a bit of a surprise for me when I started working on this exhibition … it’s not one step after the other. It’s a lot of wrong turns,” she said.

The broken stone features three scripts in two languages — 14 lines of formal hieroglyphs, 32 lines in the demotic language (the simplified, everyday handwriting used in ancient Egypt) and 54 lines of ancient Greek — the only one of the three understood at the time. The inscription itself is a mass decree passed in 196 BC by a council of priests to mark the first anniversary of the coronation of 13-year-old Ptolemy V Epiphanes.

A young Frenchman called Jean-François Champollion made the major breakthrough. Sickly but obsessive, he first studied the script at age 17, choosing to focus on the circled hieroglyphs thought to be names of important Egyptian figures.

“He takes his first good look in 1808 but he’s very discouraged, actually, because he finds it very difficult. And he complains that the copies are not good. And so he looks at some other objects and is then also very discouraged. And then he says, OK, I’m going to abandon everything,” Regulski said.

Frustrated, he paused his efforts, choosing to immerse himself in Coptic — a living language derived from ancient Egyptian.

In England, Champollion’s main rival in the race to decode the slab focused his efforts on the demotic section of the stone. Dr. Thomas Young demonstrated that this section was made up of sounds as well as ideographic signs (words or ideas). However, he remained unconvinced that the hieroglyphics had a phonetic component.

Champollion announced his decisive breakthrough in September 1822, according to Regulski, proving it was a phonetic language, not just a script.

“The very important thing that Champollion discovers and distinguishes him from anyone else before him is that he realizes that it’s not just alphabetic but it’s a hybrid or a mixed system. There are signs that are complete words and then there are signs that are individual letters and that all works together as one. He manages to understand that,” Regulski explained.

The Rosetta stone has been on display in The British Museum since 1802 with only one two-year break during World War I, when it was kept underground for safety. With the anniversary of its deciphering, Egyptian scholars have renewed calls to have the object returned. However, Regulski said that the museum had received no formal request from Egypt.

The exhibition also celebrates the swagger of the culture revealed by hieroglyphics — why and how the dead were mummified, the sophisticated time-keeping and measuring systems, as well as how ordinary people loved, got married, divorced, kept accounts and did business.