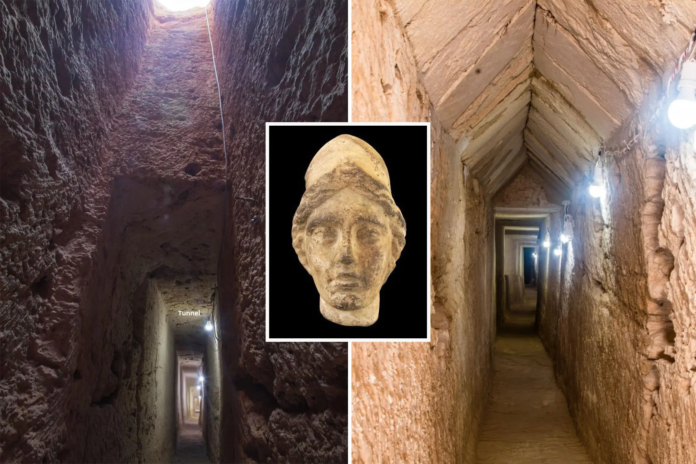 Uncovered tunnel, located more than 13 meters underground, has been described by Egyptian authorities as a ‘geometric miracle’

Archeologists in Egypt have uncovered a vast underground tunnel near the city of Alexandria, and hope it may lead them to the long-lost tomb of Egypt’s last pharaoh and possibly its most famous ruler, Queen Cleopatra VII.

The tunnel, located more than 13 meters (43 feet) underground, was described by the ministry as a “geometric miracle” that may lead to Cleopatra’s final resting place.

The excavation was conducted by a Dominican-Egyptian archaeological mission from the University of San Domingo.

“This is the perfect place for the tomb of Cleopatra,” Dr. Kathleen Martinez, who headed the joint mission, told Heritage Key.

“If there’s a one percent chance that the last queen of Egypt could be buried there, it is my duty to search for her,” Martinez said.

Cleopatra was the queen of the Ptolemaic Kingdom of Egypt from 51 BC until her death in 30 BC, when Rome took over the land. Her death also marked the end of the Hellenistic period.

The love affairs and power struggles she waged with Roman dictator Julius Caesar and Roman politician Mark Antony are believed to have had a significant impact on the course of Egyptian and Roman history, with the latter immortalized by William Shakespeare in his play “Antony and Cleopatra.”

“This is the first time that any archeologist has found tunnels, passages underground [and] inside the enclosure walls of the temple,” Martinez said, noting that if the find does lead to Cleopatra’s tomb, it would be “the most important discovery of the 21st century.”

Martinez has been working at the Taposiris Magna Temple and actively searching for the lost tomb for over 15 years.

Part of the tunnel was found to be submerged underwater, supporting a leading theory that says that the temple’s foundations are also underwater due to at least 23 earthquakes that hit the area between 320 and 1303 AD.

Martinez’s team unearthed several notable artifacts under the temple during their recent mission, including coins bearing the names of Queen Cleopatra and Alexander the Great, as well as ancient statues of the Egyptian goddess Isis.

Previous excavations at the site have also uncovered mummies with golden tongues and a cemetery that contains mummies facing the temple, both signs of a royal tomb being located nearby, according to Martinez.

Egypt’s most famous archaeological find to date is considered by many to be the tomb of King Tutankhamun, which was unearthed 100 years ago.

If Cleopatra’s tomb is found, that could change.

‘Pepsi weren’t counting on a dreamer like me’: the student who sued a soft drink giant for a $23m fighter jet