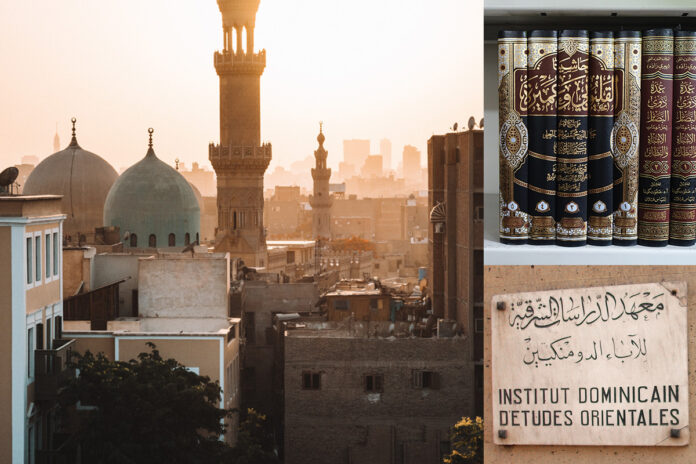 The 50-year-old French monk is the director of Cairo’s Dominican Institute of Oriental Studies, a prominent academic centre whose genesis lies in a tiny monastery established by three Dominican brothers from Jerusalem more than a century ago.

It is now a global magnet for scholars of Islam and Arab civilisation and, more importantly to Father Emmanuel, it acts as a bridge between Christianity and Islam.

The holder of a doctorate in medieval Islamic philosophy and a fluent Arabic speaker, Father Emmanuel says his leadership of the institute is more than a job or even a calling — it is everything.

“It is not easy, but it’s our hope, my calling and my mission in life. It’s what gives my life a meaning” – Father Emmanuel Pisani, director, Dominican Institute of Oriental Studies, Cairo –

“It is not easy, but it’s our hope, my calling and my mission in life. It’s what gives my life a meaning,” he told The National during a tour of the institute’s ibrary of more than 180,000 volumes, which has one of the Middle East’s largest collections of Islamic heritage books in Arabic.

“I have no spouse or children. So, if I have no calling or a sense of purpose, then my life will be difficult. What I try to do is what gives sense to my life.”

When founded in the late 19th century, the monastery was located in the desolate desert on the eastern side of the Egyptian capital. The focus of the founding monks and their successors was the in-depth study of Egypt’s history to enable them to better understand the Bible from a historical perspective.

They also immersed themselves in theology and the interpretation of the Quran at a time when Egypt was witnessing a renaissance in Islamic thought led by scholars such as Mohammed Abdou and Rasheed Reda.

The monastery has not changed its location — although it became a research institute in 1953 — but the area around it has morphed beyond recognition.

The cemetery on whose edge it once sat has been rolled back to make way for a motorway. The barren desert that once surrounded it has become a busy but drab district of government, police and military buildings that becomes eerily deserted after sundown.

Visitors to the institute, however, only have to take a few steps after passing through its metal street door to be rid of the dreariness of its surroundings and savour the place’s isolation.

Its grounds are defined by an air of peace and tranquillity, thanks to an austere but eye-pleasing garden. Its buildings are spartan yet tasteful.

In many ways, the institute belongs to the category of Cairo’s many hidden architectural and historical gems that only the learned and seasoned travellers and locals appreciate.

It shares that category with scores of opaque, unique sites across the chaotic, Nile-side city of 20 million, such as the deserted aristocrats’ mansions from the days of the monarchy, or the former homes of colonial officers or western adventurers in neighbourhoods that have over the years descended into decay and overcrowding.

In contrast, the Dominican Institute of Oriental Studies, which has a total of eight monks, stands out because it is meticulously maintained and has a relevant role to play in today’s world.

Its unusual location, moreover, has one big advantage that has served its purpose over the years: it is close to Al Azhar, the world’s foremost seat of Sunni Islamic learning in Cairo’s medieval quarter. It is at Al Azhar that Father Emmanuel, as part of his outreach, gives a monthly lecture on topics such as Islamophobia and secularism.

“I am not afraid of tackling difficult and controversial subjects,” he says about his lectures, delivered in French.

Besides its academic links to Al Azhar, the images inspired by Quranic tales on the windows of the institute’s chapel are further evidence of its pursuit of harmony between Muslims and Christians.

Significantly, that endeavour comes at a time when Islamophobia, right-wing extremism and harsh anti-immigration policies are poisoning relations between followers of the two faiths, particularly in Europe.

“It is not a typical Catholic chapel. It is in communion with Islamic traditions. We are not about exporting Latin traditions. Mass in the chapel is held in French and Arabic,” said Father Emmanuel, who moves with a quickness that matches his speech.

He says he took this position reluctantly a year ago after two decades of annual visits to Cairo for research. What he left behind in France, he said, was his drive to bridge the gap between his country’s Christians and its six million Muslims, Europe’s largest single Muslim community.

“I was teaching in Paris. I did not want to come here. I wanted France’s Christians to be more open to Muslims. To promote dialogue between them,” he explained.

In a demonstration of this desire to build bridges, Father Emmanuel peppers his accented but fluent English with classical Arabic phrases to make a point or for lack of the appropriate English equivalent of a French phrase.

“We all live in the same house and our planet has become a village in which we all have to live together.”

The Dominican order to which he belongs was founded in the 13th century, the heyday of the European Crusades waged against the Muslims of the Middle East in the name of Christianity.

Father Emmanuel, perhaps the quintessential embodiment of a modern day Dominican brother, goes on the defensive when France’s often brutal colonial past is brought up, or the participation, albeit non-combative, of the order in the Crusades.

“They had rosaries instead of the swords carried by soldiers,” he said, in keeping with the non-violence conviction of the order’s founder.

“That was in the past, although I realise that the past cannot be entirely divorced from the present. I am French, but the world has changed so much. We live in a world that has nothing to do with our colonial past.”

But Father Emmanuel himself is a direct product of France’s colonial past.

To encourage European settlement of Algeria, the French government passed a law in 1830 that granted citizenship to those willing to settle in the North African nation, he explained.

“This is how my very distant ancestors, who were Italians from Pisa, became French,” he explained. “The generations followed each other but that stopped with my father, who was born in Algeria. I was born in France and I don’t know the country [Algeria] of my ancestors.

“Perhaps in studying Islam I have unconsciously shown the desire to find out about my roots and this culture of the East that has shaped generations of Pisanis.”