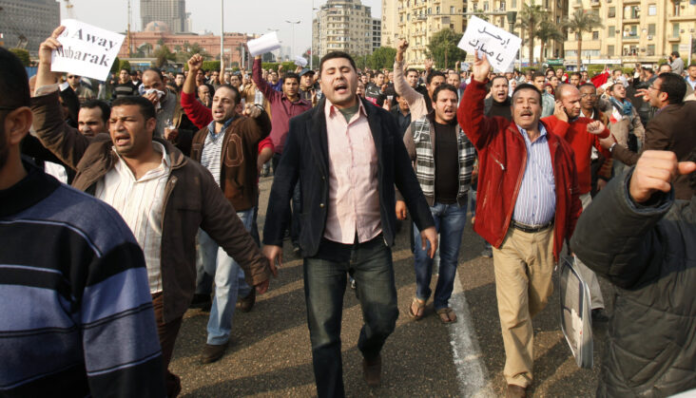 The streets of central Cairo were largely deserted on Friday as people appeared to heed calls from officials to steer clear of areas where overseas members of the outlawed Muslim Brotherhood had called for anti-government rallies.

Police were joined by national security officers in Tahrir Square as part of an increased security presence in the area after a weeks-long campaign on social media by Brotherhood supporters, who urged people to gather and protest against the government on November 11.

Security vehicles, including those carrying riot police, were seen in various other parts of Cairo, including the affluent Heliopolis district, where the largest of Egypt’s presidential palaces is located.

However, the increased police presence did not appear to be needed, with streets devoid of traffic and the usually heaving pavements empty.

A number of mosques across Cairo broadcast Friday sermons denouncing the call for demonstrations.

One preacher urged citizens to “not heed disrupters and practise patience and acceptance during this difficult time”, while another lauded the government’s “many national projects, the ones we know about and the ones we don’t”.

Buses were also suspended in the capital from Thursday night until Saturday for “maintenance”. Several concerts on Thursday and Friday nights around Downtown Cairo were cancelled without a stated reason.

Earlier in the week, the number of people passing through central Cairo appeared to drop, with several companies closing offices and shops after officers stepped up random checks on pedestrians.

A shopkeeper in Talaat Harb, a shopping hub for the lower classes, told The National he decided not to open on Thursday morning until “we see how this is going to turn out”.

A student at the American University in Cairo’s Tahrir campus told The National that the institution’s security director had called a meeting this week and warned students to avoid the area on Friday because there would be an increased police presence.

Anti-government journalists, activists and exiled dissidents affiliated with the Muslim Brotherhood have led a social media campaign in recent weeks calling for rallies to coincide with the arrival of US President Joe Biden in Sharm El Sheikh for the Cop27 global climate summit.

Calls for protests have been trending on various social media channels since mid-October.

However, on Friday, a hashtag decrying the call also garnered tens of thousands of retweets from pro-government commentators. The call was also criticised by non-Islamist opposition figures, many of whom said they did not think that destabilising the country at this time would be beneficial.

An economic crisis caused by the war in Ukraine, global energy prices and a domestic slump has gripped the country in recent months. The country has seen a three-fold increase in the country’s foreign debt since 2014 and the currency has dropped to its lowest level against the dollar.

The country’s human rights record has also been in the spotlight as it hosts Cop27, particularly the case of jailed dissident Alaa Abdel Fattah, who has been on hunger strike since April after being imprisoned for the better part of a decade.

Mr El Sisi told reporters that Egypt is “taking a comprehensive approach [to human rights] and we pay attention to that subject and we try and develop ourselves”.

The former general, who was elected to office months after the military removed senior Muslim Brotherhood figure Mohammed Morsi from the presidency amid mass rallies in July 2013, addressed the calls for protests last month.

He told Egyptians that the Brotherhood “would have slaughtered you in the street if it weren’t for the military’s iron fist”.

After year of turmoil, Kazakhstan looks for reform to translate into closer Western ties