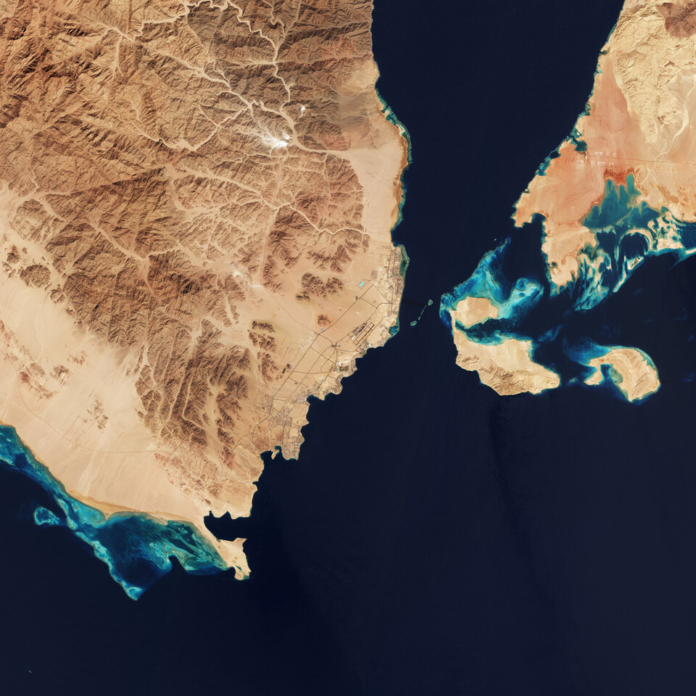 World leaders, policymakers and delegates from nearly 200 countries have convened in Sharm El-Sheikh over the past two weeks at the COP27 UN Climate Summit. Today we take a closer look at the Egyptian city through the eyes of Copernicus Sentinel-2.

Sharm El-Sheikh is an Egyptian resort city on the southeast tip of the Sinai Peninsula, on the coastal strip along the Red Sea. The coastline is dotted with restaurants, bars and resorts. This striking true-colour image shows the Gulf of Aqaba at the top-right, feeding into the Red Sea – home to some of the hottest and saltiest seawater in the world.

The Red Sea is connected to the Mediterranean Sea via the Suez Canal (not visible), one of the world’s busiest waterways.

The area offers many opportunities for diving. A series of coral reefs, which host rich marine life, can be easily spotted in the image. The variations in the colour of the water surrounding the islands and in the right of the image represent the depth of water. The lighter areas show more shallow waters than the vast expanse of deep blue/turquoise.

Over the past two weeks, world leaders are discussing action to tackle climate change at the COP27 Climate Summit. With the planet on course for 2.4-2.6 degree C warming (relative to pre-industrial levels) and warnings of future catastrophe from the UN, the conference’s central focus has been on limiting future greenhouse emissions and addressing loss and damage resulting from the unavoidable consequences of climate change.

As an official observer to COP27, ESA representatives have been participating throughout the event to highlight the value of space-based observations, not only for the scientific understanding of climate and how to improve predictions of future change, but also proving how space data can support commitments made at COP.

ESA has also shown how the growing use of satellite data is enabling the global community to take climate action and track progress towards nationally pledged commitments to limit global warming that are enshrined in the Paris Agreement.

The Copernicus Sentinel-5P satellite has proved crucial in implementing the ambitious Methane Alert and Response System (MARS) initiative. The project aims to scale up global efforts to detect and act on major emissions sources and accelerate the implementation of the Global Methane Pledge.

Through its REgional Carbon Cycle Assessment and Processes project (RECCAP-2), ESA’s Climate Change Initiative is pioneering research in how to use space data to improve estimates of surface fluxes between the atmosphere, land and ocean to compare to national-scale estimates.

Find out more about how space can respond to the threats posed by the climate crisis by exploring ESA’s interactive Climate Change from Space kit.