Eight years after the Arab spring, unrest has shaken the Middle East and north Africa, amid youth joblessness and falling oil prices

Apresident toppled in Algeria. Renewed demonstrations in Egypt. More than 100 people killed in Iraq. The Lebanese prime minister’s resignation – brought about by protesters who say they are just getting started. It has been a year of rage across the Middle East.

At the Al-Shareef coffee shop, on a dusty highway in the Jordanian capital, Amman, a waiter with a remote control flicks past news channels to an American movie playing silently. It is just after 1pm, and the cafe is filled with young men dealing cards, cracking jokes and staring at their phones. The unrest enveloping the region could be a million miles away, but such scenes point to a major contributor, according to analysts.

“I want to work,” says Muhammad, 24, an engineer who picks up odd jobs and occasionally works as a driver for ride-sharing apps, but is yet to find a steady position. “I’ve studied, I’ve got my degree, but when I see the jobs out there I think this isn’t worth it. I’d prefer to wait for something that is.”

Mummified lion and dozens of cats among rare finds in Egypt

Youth unemployment in the region, the highest in the world at the time of 2009 financial crisis, has grown over the past decade more than anywhere else, according to the International Labour Organization (ILO). Nearly 30% of young people in Arab states and North Africa are unable to find work; more than double the international average.

The material deprivations that helped spark the Arab spring eight-years ago have deepened, exacerbated by the war and refugee crisis that trailed in the wake of those revolts. Even in Tunisia, held up as the region’s sole democratic triumph, economic indicators are largely worse today than when the fruit vendor Mohamed Bouazizi set himself on fire in January 2011 and inspired protests across the region.

The demands of this new wave of demonstrators in Iraq, Lebanon and elsewhere vary widely, but have shared roots in frustration with creaking systems that are failing hardest for young people.

“They are on the streets because they’re simply tired of the status quo,” says Ghia Osseiran, from the Centre for Lebanese Studies, of the demonstrations in Beirut and other cities. “The main demand is for political reform, but there is also a demand for social justice, which is about access to education, healthcare, basic services and jobs.”

Even Jordan, long regarded as an island of relative stability, has witnessed the turnover of seven governments in the past five years and resorted in September to unusually harsh force against teachers protesting for better pay, the longest public-sector strikes in the country’s history.

The kingdom has a well-educated population (an estimated one in every 65 Jordanians has an engineering degree) but one of the world’s highest youth unemployment rates at nearly 40%. “It is the biggest challenge facing Jordan today, and the size of the issue has gotten bigger,” says Joumana Ghunaimat, a state minister and government spokeswoman.

Lacking the vast oil and gas reserves of its neighbours, Jordan is hostage to instability in the region, she says, with wars in bordering Syria and Iraq discouraging international investment and drawing more than one million refugees to the country, straining public resources.

“If young people don’t have jobs, they are not part of the structure of the economy, and then where can they go? To terrorist groups, to drugs. We might have new kinds of social crime. This is the impact and why unemployment is a very sensitive issue.” 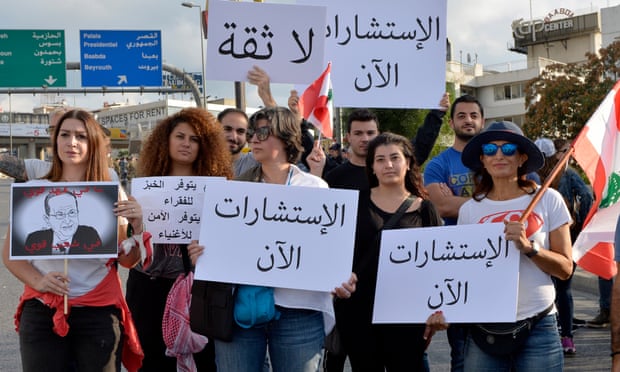 With an eye on unrest elsewhere, Jordan is proposing measures that include cash rewards for employers who hire local people in industries that traditionally recruit migrants. It is also being urged to improve the jobs in fields such as agriculture and manufacturing, where positions are rejected by most Jordanians because of the long hours and poor conditions.

Even deeper changes may be required – a rewriting of the essential social contracts that have traditionally underpinned many Middle Eastern states.

For decades, oil-rich countries and their neighbours, such as Jordan and Egypt, have absorbed graduates into bulging public sectors, in what scholars have described as an “authoritarian bargain”: rulers grant citizens jobs and handouts in exchange for fewer demands that they relinquish power.

Mahmoud Araissi, an associate professor in finance at Beirut’s Lebanese American University, recalls his time teaching in the United Arab Emirates, where most of his students would be placed in government jobs. When he visited their offices, he was often surprised by the lack of productivity.

“If their office was, say, preparing lists of customers, they would be helping to enter names into Microsoft Excel,” he says. “And the students seemed to be the experts in comparison with the full-time employees who were working there, even with their very little knowledge. It seemed like the jobs were a perk the government was providing to keep people happy,” Araissi says.

In recent decades these tacit agreements between rulers and their people have come under pressure. Youth populations have surged, increasing the demand for jobs and services; at the same time, declines in the price of oil and advances in renewable energy have raised the prospect that fossil fuels may one day be superseded.

The old bargains are coming unstuck, with nothing to replace them. “It is now a question of redefining the social contract, redefining the role of the state as a guarantor of social justice,” says Patrick Daru, a senior specialist in Arab states at the ILO.

States like Singapore have managed to pull off this transition, growing strong private sectors without giving up their autocratic systems. Middle Eastern states have generally failed to do so for a key reason, says Nader Kabbani, director of research at Brookings Doha.

“It is the crony capitalism issue,” he says. “What distinguishes countries of the Middle East from others with a more effective authoritarian bargain is they haven’t been able to reduce interference in the private sector.”

“When you speak about the private sector in the Middle East and north Africa, it revolves around the rulers,” Araissi says. “If business leaders are close to rulers, they have a chance to prosper, and others really don’t.”

This favouritism blights economies at every level, frustrating many young people who apply for work knowing that without a personal connection their chances of success are remote.

“My friends talk about this all the time,” says Ruqayya Zakaria, 26, a Jordanian who graduated with an engineering degree three years ago and is still only getting short-term work. “Sometimes it feels hopeless, because you apply knowing you aren’t getting the job.”

Without more fundamental changes, it might be coffee shops like Shareef that continue to prosper, over the young people who idle away the afternoons inside them.

Defence ministers of Cyprus, Greece and Egypt to hold trilateral in Athens