Has ISIS spread? Shock map shows cells have sprung up in WEEKS during jiahdi reaction

Has ISIS spread? Shock map shows cells have sprung up in WEEKS during jiahdi reaction

New data compiled by the Clarion Project reveals the disturbing number of ISIS cells that have been uncovered in far-flung corners of the world in the past four months.

Since late September, at least 12 terror groups affiliated with Daesh have been discovered in eight different countries, including, Ireland, Belgium, Russia and Saudi Arabia.

The data suggests that although the self-declared caliphate in Raqqa was finally broken this week, the jihadists reach is spreading out from the Middle East and further into North Africa and the Gulf.

Half of Arab leaders absent from Tunisia summit

Tunisia extends state of emergency for a month

The first cell was uncovered on September 27 in Belgium, when an ISIS recruiter was arrested close to Brussels.

A day later, it was announced the Guardai were investigating a suspected terror cell run by two Chechyan brother in west Ireland.On September 30, a six-person ISIS cell was discovered in Tunisia, with a second four person group caught on October 11.

On October 14, 11 jihadists were arrested in Morroco, while in the Russian capital of Moscow, two suspected ISIS cells were discovered earlier this month.

There were also four cells found in three Gulf states – two in Egypt, and one apiece in Iran and Saudi Arabia. 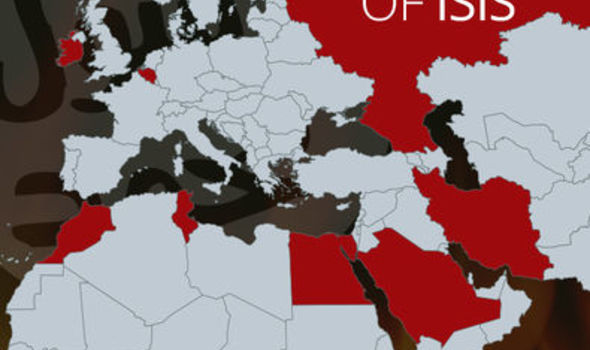 This map shows the countries ISIS has infiltrated in recent months

In one instance in Egypt, on October 15, security services foiled a planned suicide bombing in Sinai.

ISIS still has a presence in Libya, and it is thought soldiers deposed from Syria and Iran are heading there to regroup.

Clarion Project’s Arabic specialist Ran Meir told the Mail: “While it is hard to say where ISIS will appear next, we can assume that after the group is driven out of Syria and Iraq, it will go to where it feels more safe – namely, Libya – and from there move on to other countries in north Africa.

“In the east, although ISIS is being driven out of the Philippines, it will still continue to maintain a small presence there and also in the neighboring country of Malaysia.

“In addition, we know the group maintains sleeper cells in European countries, as well as in the more stable Middle Eastern countries of Iran, Saudi Arabia and the Gulf States.”