How ISIS virus has spread around the globe even as its heartland caliphate collapses: Map reveals where cells have sprung up in the past MONTH as the group is obliterated in Iraq and Syria

How ISIS virus has spread around the globe even as its heartland caliphate collapses: Map reveals where cells have sprung up in the past MONTH as the group is obliterated in Iraq and Syria

At least a dozen terror cells linked to Islamic State have been uncovered across the globe in the past month alone, research has found.

As ISIS is defeated in its ‘caliphate’ in Syria and Iraq, the terrorist organisation is looking for new territory.

In the past four weeks, ISIS cells have sprung up in as far flung places as Russia, Ireland and the Democratic Republic of the Congo.

Middle East Oil Giants Are About To Upend Oil Trading

This map, compiled with the help of the Clarion Project, shows that ISIS is establishing more cells in North Africa and in the Gulf States and conquering new ground in Europe and central Africa.

News of its most recent ‘addition’ came on Wednesday when a video showing jihadists claiming to have established the ‘Islamic State in Central Africa’ began circulating on pro-ISIS websites and social media accounts.

The video shows a man addressing the camera in Arabic, calling for ISIS-supporters to join them in the Democratic Republic of the Congo.

ISIS fighters fleeing its now-destroyed ‘caliphate’ in Iraq and Syria are believed to be heading for Libya, where the terrorist group has an established presence. 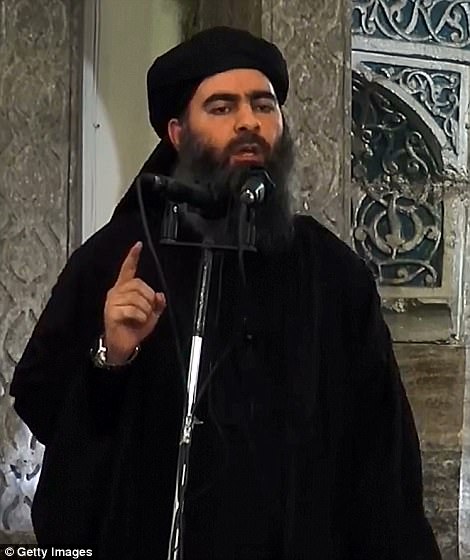 Allegiances: ISIS has several factions, known as ‘provinces’ who have sworn loyalty to leader Abu Bakr al-Baghdadi, who was thought to have been killed earlier this year

It is thought that they will use this as a stepping stone to win territory in countries further down the continent.

Four cells have been exposed in Libya’s neighbouring countries Tunisia and Egypt since the end of September.

‘While it is hard to say where ISIS will appear next, we can assume that after the group is driven out of Syria and Iraq, it will go to where it feels (relatively) more safe – namely, Libya – and from there move on to other countries in north Africa,’ says Clarion Project’s Arabic specialist Ran Meir.

‘In the east, although ISIS is being driven out of the Philippines, it will still continue to maintain a small presence there and also in the neighboring country of Malaysia.

‘In addition, we know the group maintains sleeper cells in European countries, as well as in the more stable Middle Eastern countries of Iran, Saudi Arabia and the Gulf States.’

ISIS has been active in Russia since at least June 2015, when The Islamic State of Iraq and the Levant – Caucasus Province was established, but earlier this month, two terror cells were busted in Moscow, leading to fears that they are spreading from the North Caucasus region across the country.

The ISIS cell being investigated by Irish Gardai is reportedly run by two men originally from the Russian federal republic of Chechnya.

Authorities believe that the two men are heading up a cell in west Ireland that has been shipping computer parts to factions in Chechnya, Iraq and Syria.

Although ISIS has had its base in Iraq and Syria, now all-but obliterated by government and US-backed forces, they have factions in several nations around the world, often referred to as ‘provinces’.

The Maute group in the Philippines, also known as the Islamic State of Lanao, pledged allegiance to ISIS in 2015, launched an attack on the city of Marawi in May, as an attempt to establish a Filipino ‘ISIS caliphate’.

As ISIS have lost ground in the Middle East, an increasing number of Islamist terrorists are thought to be looking to join Maute, including ISIS fighters who have left Iraq and Syria.

In Egypt, ISIS-affiliate Wilyat Sinai has been leading an Islamist militant insurgency in northern Sinai, which borders the Gaza Strip and Israel, for several years.

Wilyat Sinai, meaning the Sinai Province, pledged allegiance to ISIS leader Abu Bakr al-Baghdadi in 2014 and has carried out several terror attacks under the black Islamic State flag since.

Islamic State in Somalia, officially established in October 2015, have been taking part in the Jihadist insurgency in the country and carried out several terror attacks.

However, the group of a few hundred fighters, has been perceived as a threat to fellow Islamist terrorist group Al-Shabaab – loyal to Al-Qaeda – and they are now also fighting each other.

West African terrorist group Boko Haram have been referred to as Islamic State West Africa Province, ISWAP, after swapping allegiance from Al-Qaeda to ISIS in March 2015.

ISIS also have provinces in Yemen, Algeria, Afghanistan and Pakistan.