The Haifa District Court on Thursday sentenced an Israeli Arab man to five years and ten months behind bars for joining the Islamic State jihadist group in Iraq last year.

In June, the court found 42-year-old Wissam Zabidat, from the northern town of Sakhnin, guilty of several charges, including membership in a terrorist organization, membership in an illegal group, illegal military training, and contact with a foreign agent.

The sentence is the harshest punishment levied against an Israeli citizen for joining the ranks of the terrorist organization in Iraq or Syria.

Wissam and his wife had traveled to Iraq along with their three children and spent over a year with the jihadist group before escaping and making their way back to Israel, the Shin Bet security service said in a statement last October, when charges were filed against the two.

While Wissam fought in the Islamic State’s ranks in Mosul, Sabrin Zabidat worked in one of the terror group’s area hospitals. Their three children, ages 3, 6 and 8, were placed in a local school.

The couple were tried separately, and in March Sabrin Zabidat was sentenced to 50 months in prison. 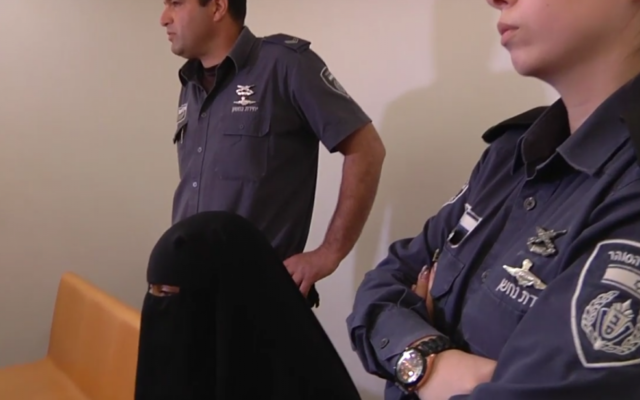 Sabrin Zabidat appears in a Haifa district court for her sentencing on March 21, 2017. (Screen capture/Ynet)

The Shin Bet investigation into the couple discovered that they flew to Romania with their children to attend a family event in June 2015. From there, without the knowledge of their extended family, they continued on to Turkey where they made contact via Facebook with an Arab Israeli man from Umm al-Fahm who had joined IS in 2013.

With his assistance, the family contacted smugglers who took them across the border into Syria, where they met up with IS members. Their Israeli passports were immediately confiscated and they were taken to the Syrian city of Raqqa, formerly considered the IS capital.

Wassim was separated from his family and sent to a camp in Iraq, where he was given lessons in religious studies and Islamic State ideology. He then took part in IS operations, guarding the group’s facilities near combat zones and participating in raids on Iraqi army posts. While fighting Wissam was wounded in the leg.

The family eventually reunited in Mosul, living in cramped, unsanitary conditions without running water or electricity. Their children did not receive any education for a long period and spent time with other children who were sick with infectious diseases. As a result, by June 2016, the Zabidats decided to return to Israel. They contacted family members who paid thousands of dollars to smugglers and others to enable them to make it back. 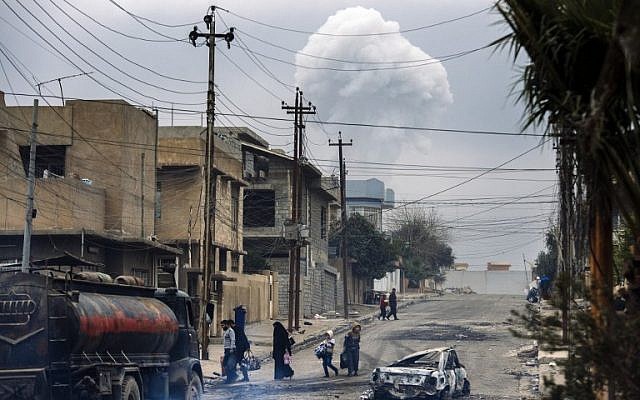 Iraqis walk down a street while smoke rises in the background following a car bomb explosion in eastern Mosul, on January 15, 2017. (AFP / Dimitar DILKOFF)

After several abortive attempts to cross the border, they made it into Turkey, where they were arrested and put in a detention camp before they were transferred to Israel.

At Thursday’s sentencing, Sakhnin Mayor Mazen Gnaim asked the judge to show leniency to Zabidat, telling the court that having both parents in prison would be “detrimental to the children.” He also noted the family was on welfare.

In recent years, several Arab Israelis have been jailed for attempting, and in some cases succeeding, to join the Islamic State group.

The Islamic State terror group does not have widespread support in Israel, and the Shin Bet estimates that several dozen Arab citizens of Israel have traveled to Syria or Iraq to join the group in recent years.