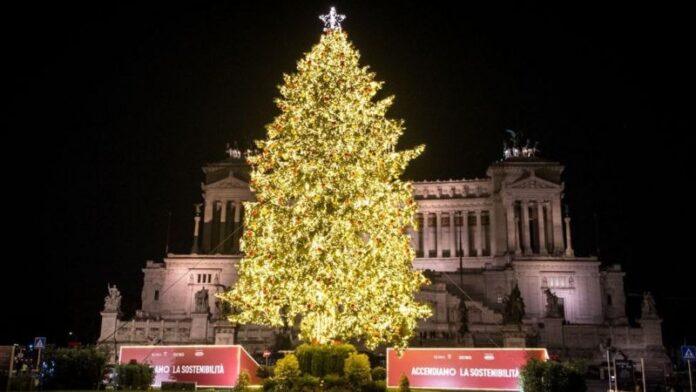 Thinking of eco-friendly ways to celebrate Christmas this year?

How about hopping on a bike to power up your Christmas lights!

That’s what people in Rome, Italy, have been doing.

A pedal-powered tree has been put up in the city’s square.

It’s powered by six bikes, which are connected to a power generator.

As people pedal their kinetic energy from their movement is changed into electricity to turn on the lights.

As energy prices rise across Europe, some people have been looking for more energy-efficient ways to light up their houses at Christmas.

This could be by making their own decorations, or using solar lights.

In Rome, they have decided to add an eco-friendly plan to the city’s Christmas decorations, through bike and solar-powered lights!

Rome’s mayor, Roberto Gualtieri, was the first to get the lights going by jumping on a bike with some of his city councillors.

There are also a set of solar panels near the tree, to add extra eco-power!

This tree in Piazza del Campidoglio – a large square in the city centre – is not the Rome’s first renewably-powered set of lights.

Last week in the Piazza Venezia, a large tree and lights were put up – all powered by solar energy.

‘A signal of peace and hope’

Svetlana Celli is the president of Rome’s City Council.

She said the bike-powered tree was a “signal of peace and hope”.

It’s not just Rome where people are hopping on their bikes for Christmas decorations.

In Borno, a town in the north of Italy, cyclists are powering the town’s Christmas tree too.

Anyone in the town can join in.

The faster people pedal, the brighter the lights will shine.

The town also decided not to put any other Christmas lights up, to make sure all the lights are powered in an eco-friendly way.