Riches to move permanently to new Grand Museum, so London show is being milked by country’s PR department

In the manner of an ageing rock star with a faltering voice but a hefty tax bill, King Tutankhamun and his entourage rolled into London this weekend for the latest stop in what his handlers insist will be absolutely, without question, his last world tour.

Almost a century after the Egyptian king’s tomb was first cracked open by a British-led expedition, and 47 years after crowds queued for hours outside the British Museum to catch a glimpse of its contents, a new exhibition will once again showcase the astonishing riches that were buried to accompany the Egyptian king into the afterlife more than 3,300 years ago.

Of course the real Tutankhamun, who died around 1,326BC, was never a diva past his prime, having lived, married, ruled and died all before his 20th birthday. But the boy king now finds himself obliged to take another turn on the world stage for motives which, as Egypt’s minister of antiquities Khaled El-Anany acknowledged on Friday, are financial as much as cultural.

The new London exhibition, staged to a moody musical backdrop at the Saatchi gallery by the global sport and entertainment promoter IMG, is the third stop in a 10-city world tour whose purpose, El-Anany volunteered with admirable frankness, was “promotion of Egypt. And to motivate tourists to come to Egypt.” 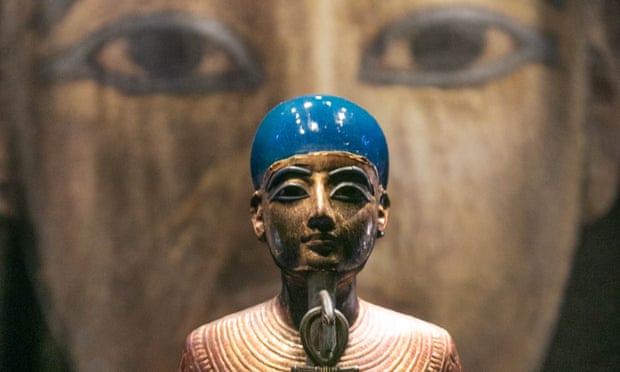 The country has seen an alarming slump in visitor numbers in recent decades thanks to turbulent politics, including the 2011 revolution and the unrest that followed, and a number of devastating terrorist attacks. The 2015 bombing of a Russian tourist jet over the Sinai peninsula led to the suspension of all flights between the UK and Sharm el-Sheikh – British Foreign Office restrictions on travel to the area were lifted only last month.

And thus, said El-Anany: “We are sending a very few of the treasures that we have, like a teaser for tourists all over the world, to motivate them to come back.”

To the voluble Zawi Hawass, one of Egypt’s most eminent archaeologists, the purpose is even more plain. “Egypt’s name will be every day for six months in the TV or newspaper. And it brings money to Egypt.”

King Tut’s pitstop in Paris earlier this year – the second leg of the tour after Los Angeles – became the most popular exhibition in France’s history and raised $10m for Egypt, Hawass noted. The money will be spent on the enormous and much-delayed Grand Egyptian Museum project in Giza, which authorities insist will finally open late next year.

All of which may explain the London ticket prices, which will set you back almost £120 for a family of four on a weekend visit – that’s before audio guides, programmes or a brief but illuminating VR “experience” for which tickets are sold separately.

The world’s most classy trade stall this may be, but even in the absence of the king’s most famous artefacts – Tutankhamun’s spectacular gold death mask and three gold coffins are barred by Egyptian law from leaving the country – this remains a breathtaking collection. 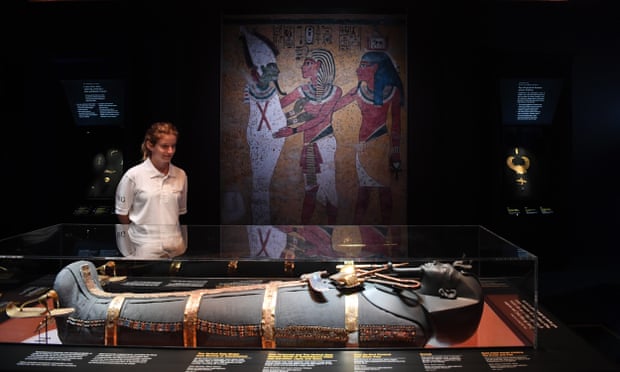 There is plenty of bling, of course – from the gilded wooden representations of the boy king steering a ship or riding a panther or hunting lions, to the spectacular solid gold chains and rings and pectoral ornaments, which were laid on his body and folded into his mummy wrappings. An exquisite gold and carnelian coffinette, barely 40cm tall and made to house his mummified liver, evokes his funerary mask on a diminutive scale.

But the exhibition also contains items that come closer to capturing the humanity of the teenager behind the mask, including a tiny wooden chair which the curator, Tarek El Awady, said was likely to be the throne on which the nine-year-old Tutankhamun was crowned, and a collection of plainly painted wooden boxes, one shaped like a chicken carcass, into which were packed cuts of meat to feed the king on his journey to the afterlife.

So spectacular are the riches at the country’s disposal, indeed, that it is hard to believe Egypt will be able to resist the temptation in future to take the treasures of Tutankhamun on the road again, whatever their marketing-led vows are now.

But Hawass insisted – “We are 100% certain, yes” – that King Tut’s treasures will never again be seen outside Egypt once the Grand Museum finally opens.

“Tutankhamun is tired. He has to relax at home. He has to go home and drink some nice beer and live at home for a long time.”