As violence and vandalism escalate in Hong Kong, some protest supporters have had enough

As violence and vandalism escalate in Hong Kong, some protest supporters have had enough

Chemicals missing from laboratories of universities

Radicals arrested after protesters and police stand-off at Polytechnic University

For most of the summer, 25-year-old Jose was an ardent supporter of the protests raging in Hong Kong. Even when demonstrations became increasingly violent, she defended the protesters themselves — they were provoked, or were fighting for a greater good, she would argue.

Then August 13 happened. That night, she watched live streams, horrified, as a mob of protesters at Hong Kong airport surrounded a man they claimed was an undercover police officer. They bound his wrists, lashed out at him after he appeared to lose consciousness, and shouted down those who pleaded to get him medical attention.

“I remember being in disbelief, looking at my TV — like, what’s happening? Why have they done this?” Jose said. “Up until that day, I’d understood what they were fighting for … I went back into my room and sat there looking at my wall for a very long time.”

The airport incident marked one of the defining moments in the protests, which began in June with peaceful mass marches against a now-withdrawn bill that would have allowed extradition to mainland China, among other countries. It has since spiraled into a broader pro-democracy, anti-government movement, with protesters laying out five major demands — only one of which has been met.

Both sides accuse the other of using excessive violence, and provoking the use of police tear gas and protester petrol bombs. Even Hong Kong itself is covered with marks of the unrest, with shops vandalized and boarded up, and many subway station entrances charcoal-black from fires set by protesters.

However with no clear end in sight, new divisions appear to be emerging in the city — besides the hardcore protest frontliners and fierce opponents, now there are wavering sideline supporters and moderates who say they have been driven away by the violence.

When does it go too far?

Most people have a different answer over whether the unrest has crossed the line. Protesters say they’re not there yet because they haven’t killed or seriously injured anyone — if anything, they think the police are the ones who have gone too far.

Marcus, a 22-year-old protester, said he drew the line at “unneeded violence” — but like many in the movement, he saw their actions as largely justified. For instance, he felt the airport violence went too far, but quickly pointed out that the mob had allegedly found evidence the man was an undercover police officer.

“When you’re in a situation like that, no one has time to be like, let me fact-check this,” he said. “The proof was there in his bag.”

Marcus’ stance reflects an apparently common attitude among the movement and its sympathizers — a vague opposition to violence, but an instinct for leniency when it comes to the protesters. “If we lose, it’s called a riot,” said Yara, a 22-year-old education consulting employee. “But if we win, it will be called a revolution, and all the violence will be for good, ultimately.” 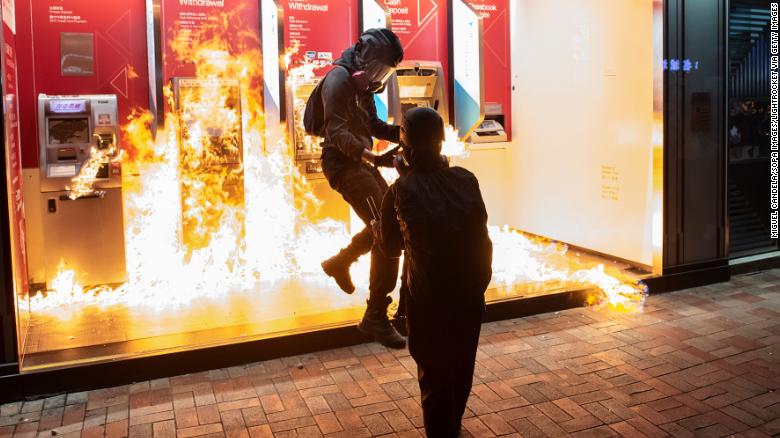 Multiple protesters who spoke with CNN returned to this perceived image of a greater good. They say they fear Hong Kong will lose its protected freedoms of speech, press and assembly, and that the semi-autonomous city will ultimately be swallowed up by mainland China.

When faced with such a fate, real or perceived, the demonstrators say little else seems to matter. Transit woes, missed flights, even disrupted education — to them, these all seem like worthy sacrifices for a movement they believe could save the city.

Critics in the “silent majority”

Standing in sharp contrast on the other side are members of the self-dubbed “silent majority” — people who oppose the unrest. They argue that the protesters are spreading chaos and fear across the city, trashing the economy, and hurting not just their own cause but everybody caught in the crossfire.

It’s unclear how many people are actually in the “silent majority,” or if they really are a majority at all, but the group appears to be slowly growing — publicly at least. One Facebook group critical of the protests has amassed more than 125,000 members in two months.

For comparison, one of the largest protest groups on the encrypted messaging app Telegram has about 240,000 members.

Many say there can be no pardoning of the protesters’ violence and vandalism. To do so would effectively justify violence against anybody with a different view, they say, and open the door to dangerous polarization and censorship. 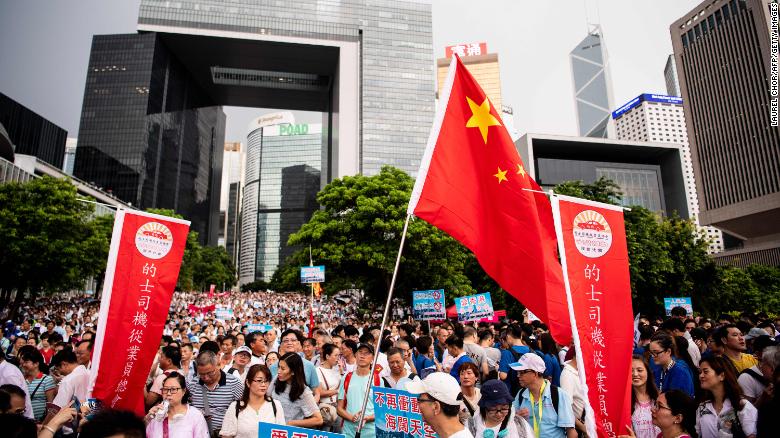 Even more sinister than the destruction itself is “the acceptance from the anti-government people,” said Patrick, 26, who also initially supported the demonstrators’ right to peaceful protest before the situation escalated.

He accused supporters on the sidelines of expressing “no condemnation” — meaning they were either scared to speak out against the movement, or truly believed that violence was right. He said he doesn’t know which is worse.

“I think that’s the scary part — not just the action itself, but the reaction to the action,” he added.

Some protesters have apologized for mistakenly vandalizing politically neutral shops, and for the airport mob attack. But many say it’s not enough. 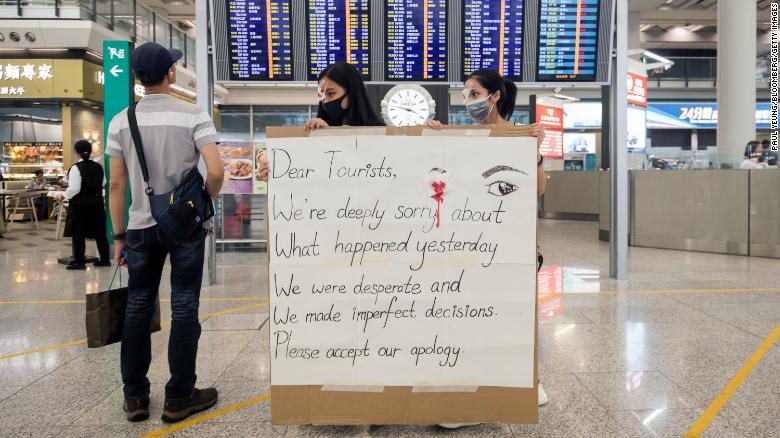 “There’s no trial and error when it comes to violence,” said Sarah, 41. She supported the peaceful mass marches in June, but started withdrawing her support when protesters began vandalizing the subway, attacking police officers, and leaking private information about the officers’ families online.

Millie, a 39-year-old banking industry employee, said the protesters’ disruption of transit systems was not merely an inconvenience, but an infringement on regular people’s right to daily life.

“They’re taking a piece of freedom from that person to travel,” she said. “Blocking people — which is their freedom to go about their own business — that’s the line for me.”

Among this “silent majority,” they also talk of a simple bewilderment — if the protesters want democracy, why are they smashing ATMs? What does vandalizing the subway system have to do with universal suffrage?

When given the protesters’ reasons — that the ATMs belong to Chinese-owned banks, that protesters believe the subway operator is in cahoots with the police — the critics interviewed by CNN wave them away as alarmist, counterproductive, or as Sarah put it, just plain “stupid.”

“Even if the government cornered them, that doesn’t legitimize the violence,” she said. “The law is the law. You don’t hurt people, you don’t break government property.” 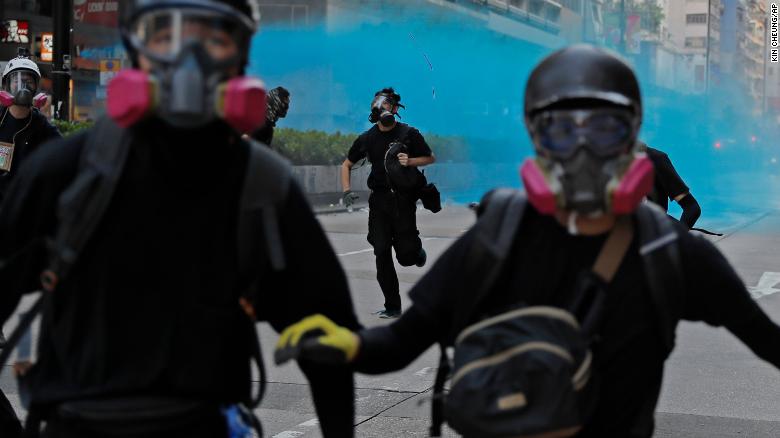 The dividing line of privilege

A common refrain among the movement is that the critics don’t understand the struggle because they have less of a personal stake in it. Maybe they’re wealthy, or an expat, or hold dual citizenship so they can leave Hong Kong anytime — their privilege prevents them from fully grasping the frontliners’ desperation, protesters say.

Some within the “silent majority” acknowledge this. “I understand I’m probably one of the privileged ones, none of this really affects me,” said Sarah, who is of Hong Kong heritage but lived in Canada before moving to the city. “I check my privilege all the time. I understand that they’re stuck here… they don’t have a second passport, this is their home.”

Still, she feels her privilege doesn’t make her criticisms wrong, just unwelcome. In fact, that distance means “it’s easy for me to be objective,” she said. 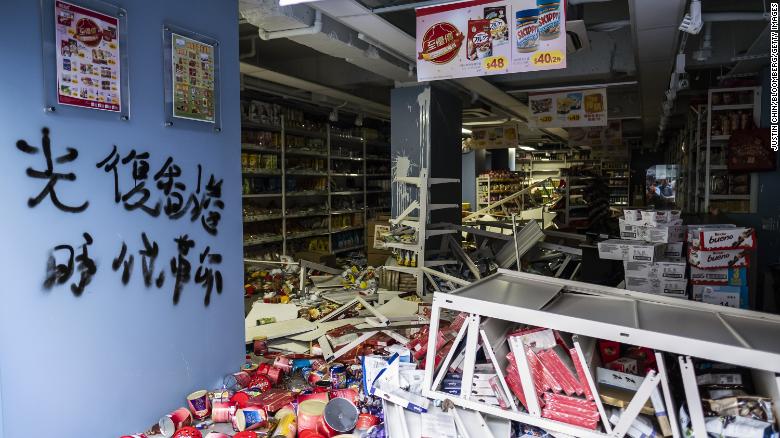 Others outright reject the notion that class or citizenship privilege has anything to do with the movement.

“I don’t buy that argument,” Patrick said, pointing out that the movement is diverse, drawing supporters of all ages, nationalities, and socioeconomic backgrounds.

Millie said the protesters’ accusation of privilege was just an excuse. After all, she hadn’t been born into wealth or privilege. She admits the protesters may be facing societal obstacles — unaffordable living, dwindling upward mobility — but “we’ve all been there,” she said.

Besides, Millie added, she only has Hong Kong citizenship. This is her home too — and the protesters are wrecking it.

Support is wavering as the protests drag on

Millie, Patrick, and Sarah had all supported the protests at the beginning, to various degrees. Sarah had been “absolutely against” the bill — but now that it’s been withdrawn, and the destruction has stretched on, “I don’t support (the protesters) at all,” she said.

Even some of those still within the movement are beginning to pull back. After the shock of the airport mob attack, Jose questioned whether she could continue supporting it. Eventually, she decided the answer was yes — but she said she has disconnected somewhat, and engages less frequently than she used to. 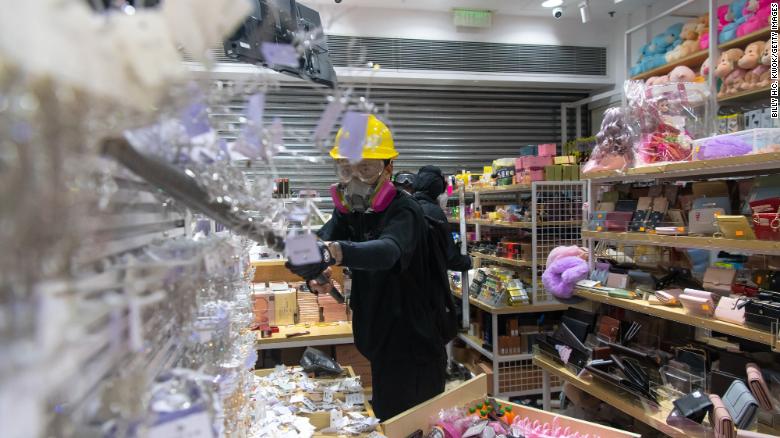 Yara, the education worker, said she was recently walking through a mall late one night when she saw a store that protesters had vandalized because the owners were allegedly pro-China. An elderly cleaning worker was sweeping up broken window glass and complaining to friends that despite the late hour, she couldn’t go home because of the mess.

“That made me realize, we’ve made our point with the vandalism, haven’t we?” Yara said. “We’ve made our point smashing the ATM machines … If we continue, people are going to slowly start seeing this as senseless violence. At a certain point, I think we need to rein in these people.”

Unemployment rate in Egypt at its lowest in 30 years