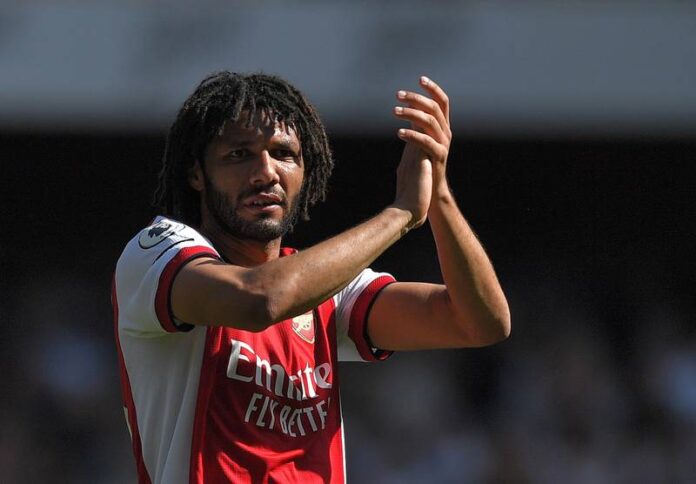 Arsenal’s Mohamed Elneny has sent a message of support to Morocco ahead of their World Cup quarter-final against Portugal on Saturday.

The Egyptian hailed the Atlas Lions’ heroics in Qatar after Morocco became the first Arab team in tournament history to make it this far.

“It’s been a brilliant World Cup with lots of surprises. Arab teams have done a great job and they’ve really entertained us,” Elneny said at Al Maktoum Stadium in Dubai on Thursday.

“I’m so happy for Morocco, they represent all Arabs and that’s something that makes us very happy. We stand behind them in their upcoming game Insha’Allah.”

The 30-year-old Elneny missed out on a second consecutive World Cup appearance as Egypt fell to Senegal in a penalty shootout in a qualification play-off last March.

He has been proudly following Morocco’s campaign though and was thrilled to see them stun Spain in the last-16.

The defensive midfielder featured in Arsenal’s victory over Lyon in the Dubai Super Cup on Thursday night and is fully focused on getting back to peak form after missing most of the season so far with a hamstring injury.

Arsenal sit atop the Premier League table with 37 points in 14 games and have lost just one match so far this campaign.

Elneny is confident the team can pick up right where they left off when the league resumes later this month following a six-month interruption due to the World Cup.

“Every team was forced to go on this break, not just us. But Arteta is really focused on this point, to make sure our momentum is not halted,” stated Elneny.

“In practice sessions we are extremely focused, and in all our games, if you saw how we played today [against Lyon], we didn’t treat it as a friendly, we played it like it was a league game. That’s our strategy within the team, taking every practice and every game very seriously so when we do play an official game, we have the same enthusiasm and intensity.

“So that’s been very good for us, taking everything seriously from the start, we don’t take too much time and hopefully in the games we’ll show the same level of commitment.”

Elneny had picked up a thigh problem during a game against Fulham on August 27 and returned to the fold for the last two games early November before the league stopped.

“I tried to come back as soon as possible so I can always be available for the team. I did my best to come back before the break so that I can work hard during the break and come back even stronger when the league resumes,” he said.

Arsenal were hit with another injury setback with news that star forward Gabriel Jesus has undergone surgery for a right knee problem he sustained in Brazil’s loss to Cameroon in the World Cup.

“Everyone is important in the squad. We love him and we all support him,” said Elneny of Jesus. “We love him so much as a player and as a person and all the squad we are ready, everyone can play; we’re Arsenal and everyone can fit in the starting 11. Of course he’s a big player for us and we wish him a speedy recovery.”