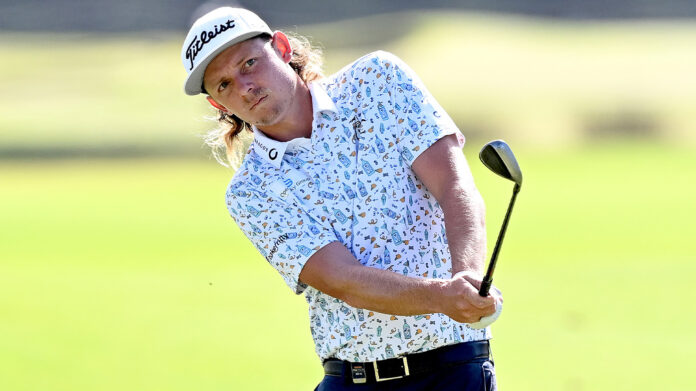 Cameron Smith enjoyed a superb 2022, breaking his major championship duck when winning the Open Championship at St Andrews. He also cause controversy by joining the Saudi-funded LIV Golf. He has admitted Rory McIlroy tried to persuade him to stay on the PGA Tour and lost sleep over his decision to jump ship for a deal reported to be worth $140 million.

Cameron Smith has opened up on his conversation with Rory McIlroy following his Open Championship win, and conceded he was leaning towards joining LIV Golf before arriving in St Andrews.

Smith overhauled McIlroy in thrilling fashion to win the Open in the summer, after which he gave a spiky response to a journalist’s question about his links to LIV Golf.

The Australian had been strongly linked to LIV for much of the summer, and it was claimed a deal had been inked before the Open.

Smith did not divulge at what stage the negotiations with LIV were at before the Open, but conceded he was of a mind to jump ship.

“I was definitely leaning one way, but it wasn’t signed on paper,” Smith told the Sydney Morning Herald. “There was still so much stuff to do, and so much to think about.”

McIlroy has been a driving force behind the PGA Tour’s battle with LIV, with his influence forcing change and an increase in prize funds.

The Northern Irishman called Smith the day after the Open to urge him to stay with the PGA Tour.

“I’ve always had respect for Rory and I’ve liked what he says on the golf course,” Smith said. “He said, ‘congrats’. There were maybe a couple of little jabs in there. He was happy I played well and it was a good tournament.

“Then we talked about the PGA Tour and LIV. There was a bunch of stuff he wanted me to know before I made my decision. I wouldn’t say he tried to directly talk me out of it, but he definitely wanted me to stay.”

LIV has split golf down the middle, with critics hammering players for jumping ship for huge sums – and taking money from the Saudi Arabia-funded series.

Smith has admitted people’s perceptions of him gave him sleepless nights.

“It felt like I didn’t sleep for a few months,” Smith said. “I was constantly thinking, ‘what will other people think?’ That was a really big factor for me. I feel like I do most things by the book and to be one to step away … was really tough for me.”

Smith had words of praise for the PGA Tour, and suggested had it added regular events in Australia his decision to join LIV might have been different.

“For me, the PGA Tour is a great place. It’s a great tour that does really good things. But as you look back, Adam [Scott] has been one of the best golfers in the world for 20 years and I just think it’s really weird for them [PGA Tour] to not have an event [in Australia] just because of him,” Smith said. “Then you have Jason [Day], Marc [Leishman], there’s a bunch of guys they could have done so much for. The Aussie crowd gets around it so much …

“But I just don’t think it’s that profitable for them and that’s kind of the reason behind it all.”

As well as the riches on offer for winning the individual events at LIV, there is focus on the team aspect. Smith is captain of Punch – there are strong suggestions he will change the name before the 2023 season – and he has revealed he has spent too much time in meetings. And warned that action will be taken if it impacts his golf.

“It’s really stressful,” Smith said. “I’ve spent more time in offices and boardrooms the last couple of months [than almost on the golf course]. But I said to my agent, ‘my No. 1 goal is to get the ball in the hole in as few shots as possible. If this gets too much we’ll have to look at other things.’”