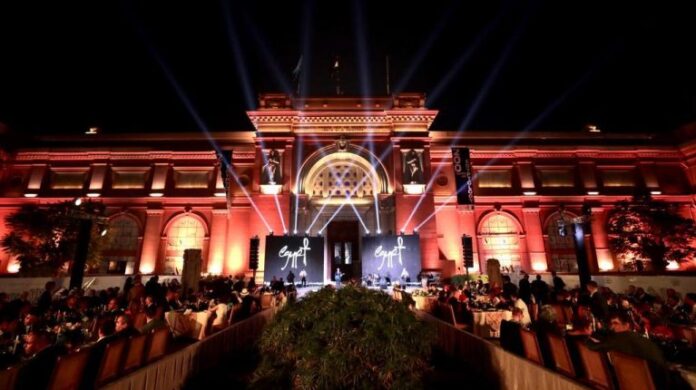 The Ministry of Tourism and Antiquities celebrated World Tourism Day — which falls on 27 September — and coincides with the 200th anniversary of deciphering the ancient Egyptian language and the inception of Egyptology as a field of academia, which gives this year’s celebration a special flavour.

The ministry decided that the best place to organize this exceptional historical occasion for all those interested in Egyptian civilisation in Egypt and the world is the Egyptian Museum in Tahrir.

The celebration was attended by Minister of Civil Aviation Abbas Helmy, Governor of Cairo Khaled Abdel Aal, Deputy Minister of Tourism and Antiquities for Tourism Affairs Ghada Shalaby, CEO of the National Museum of Egyptian Civilisation Ahmed Ghoneim, and CEO of the Egyptian Tourism Promotion Board Amr Al-Qadi.

This is in addition to a number of leaders of the tourism ministry, a group of ambassadors from around the world, and a number of heads of foreign antiquities institutes in Egypt.

Mostafa Waziri — Secretary-General of the Supreme Council of Antiquities — stressed that the Egyptian Museum in Tahrir is the seat of Egyptian civilisation.

He explained that Egyptology began with the discovery of the Rosetta Stone on 15 July 1799; noting that since this date, there have been several attempts to decipher the lines written on the Rosetta Stone.

Waziri added that there were two failed attempts before French scientist Jean-François Champollion succeeded in deciphering the stone.

He also shed light on recent archaeological discoveries, which confirm that Egyptology and the ancient Egyptian civilisation have not yet revealed all their secrets.

The celebration witnessed a number of events, including the opening of a temporary exhibition of antiquities in Hall No. 44 on the ground floor of the museum to shed light on the importance of ancient Egyptian writing by displaying a group of statues of Egyptian writers, writing tools and supplies, in addition to displaying a group of artefacts that were discovered by Ahmed Pasha Kamal — one of the largest and oldest Egyptian archaeologists. The exhibition also included the first pieces to be documented in the museum’s records.

The remodelled Daily Life Hall No. 34 on the upper floor was also opened in cooperation with the Australian Embassy. The hall contains many tools that ancient Egyptians used in their daily lives.

This is in addition to the opening of the Tanis Archaeology Hall (San Al-Hajar) to the public after the completion of its development within the framework of the Egyptian Museum development project. The hall contains a large collection of treasures from the city of Tanis — the capital of the kings of the 21st and 22nd dynasties, which were discovered by French archaeologist Pierre Montet during World War II.

These pieces include approximately 2,500 artefacts from the tombs of the kings of these two dynasties, including golden masks, silver coffins, golden finger covers, gold ornaments inlaid with semi-precious stones, pots made of gold and silver, bronze pieces, ushabti statues, and alabaster canopic pots. This is in addition to displaying a full stereoscopic model of the Tanis cemetery, along with a set of archival photos of the archaeological area.

A temporary exhibition was also opened in Gallery No. 43 on the upper floor, which included a group of archival photos from the archives of the Egyptian Antiquities Registration Centre and the archives of the Egyptian Museum, which depicted views of a number of archaeological sites throughout the republic during the 19th century and an exhibition selling books at reduced prices.