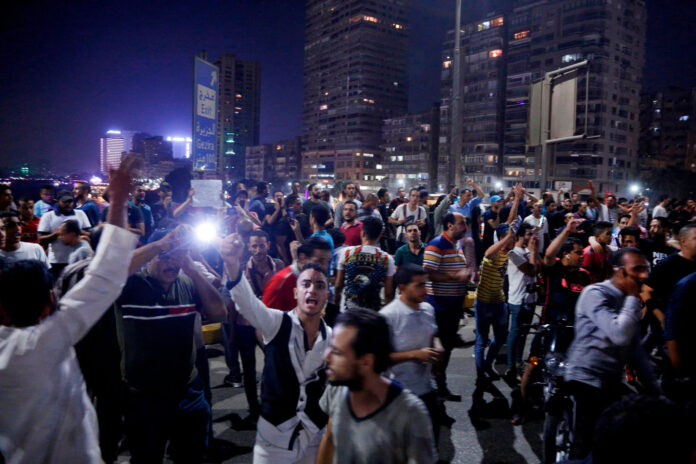 Egyptian authorities have begun detaining people in response to calls for mass protests next month as the country’s economic and monetary situation continue to deteriorate, according to human rights lawyers.

Dozens have reportedly been rounded up in a number of provinces, particularly in Cairo and neighbouring Giza. The human rights lawyers have met or seen some of those detained at police stations.

Security forces, some in plain clothing, are arbitrarily stopping individuals – many of them young men – searching their phones, and arresting some of them, according to the Egyptian Network for Human Rights.

The mass demonstrations are being called for on November 11 to protest worsening socio-economic conditions, days after the Egyptian pound reached a record low and the US dollar.

Cash-strapped Egypt has now reached a deal with the International Monetary Fund.

The Arabic hashtags “11/11”, “Liberate your country”, “Leave [President] Sisi” were among some which have gone viral on Twitter in recent days.

Government officials and pro-government MPs have shrugged off the calls for protest. Parliament member Abdelmonem Emam, head of the Justice Party, said they “do not represent the Egyptian people” and are not worth responding to.

The US Embassy had earlier warned its citizens of possible demonstrations, advising them to stay away from large gatherings.

“Over the last 24 hours, Egypt has experienced a significant currency devaluation, which impacts its economy and population. Some postings on social media are currently calling for protests in Cairo, including following a local soccer match tonight. Social media posts also indicate that cafes will close after the match as part of the protests,” the US Embassy in Egypt said on its website.

“US. citizens should, therefore, be aware of both the possibility of protests and potential for increased law enforcement and security presence in Egypt,” it added.

The embassy advised its citizens to monitor local media for updates, avoid large demonstrations and crowds, keep a low profile and be aware of their surroundings.

The Central Bank of Egypt on Thursday implemented exchange rate flexibility, allowing the value of the Egyptian pound to be regulated by market forces in a bid to save an already ailing economy.

Following the controversial decision, the local currency dropped in value against the US dollar by 12%, following a 15% spike in the inflation rate, the highest in four years amid growing economic hardships, and the second floating in 2022.

On the same day, the government reached a deal with the IMF for a new $3 billion loan to support its ‘reform’ program.

Egypt is scheduled to host the COP27 summit in the Red Sea resort of Sharm el-Sheikh starting on November 6.