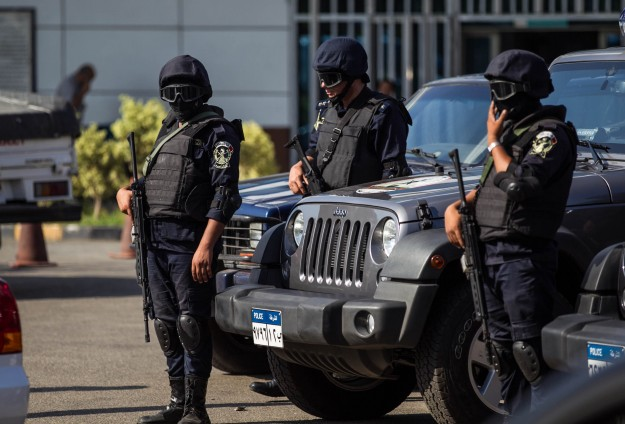 Egyptian police have ordered public events and shops across the country to cease activity on Friday amid growing calls on social media urging people to join anti-government protests.

Incidents of police ordering shop owners to remain closed on Friday were reported in several cities. The only exception is the Cop27 summit currently taking place in the Red Sea resort of Sharm El-Sheikh.

Middle East Eye reached out to five youth centres in Cairo, Giza, Luxor, Alexandria, and Asyut and each one of them refused to accept pitch booking requests citing “security reasons”.

According to a source in the youth and sports ministry, all youth centres and sporting activities were cancelled from Thursday night until Saturday noon.

“The ministry distributed the same statement to all officials responsible for sports centres countrywide. All pitches and youth centres will be closed, especially ones which rent out football pitches to young people,” the source told MEE.

The tight closures come in response to calls on social media for protests against the spiralling cost of living crisis.

Egyptian forces have arrested hundreds of people in recent weeks, some of them detained for sharing posts or media content encouraging the demonstrations.

Earlier this week, the Egyptian football clubs association postponed two rounds of the Egyptian Premier League, including matches that were scheduled on Friday. The association’s president cited the hosting of the Cop27 summit as the reason.

“The government fears that what happened in 2019 will be repeated,” the ministry sources told MEE. “Given that thousands of fans are currently allowed to enter stadiums, the matches were postponed.”

One representative from an Alexandria youth centre, located in the popular and busy Sidi Gaber neighbourhood, told MEE that the facility has been turned into a parking space for security trucks and a makeshift camp for soldiers and security officers.

In Cairo, the downtown area – home to the iconic Tahrir square that witnessed the start of the 2011 revolution – has been transformed into a military zone.

Dozens of riot police trucks loaded with military and police soldiers have been deployed in major squares and near underground metro stations.

In Suez city, which is known for its strong antagonism with the police, the al-Arbaeen Square has also been turned into a fortress of armoured vehicles and riot police.

Beyond sports venues, the closure orders have affected various businesses across the country.

Fawzy, a worker at a women’s underwear shop in downtown Cairo, told MEE that plainclothed police officers came to their store earlier this week and ordered them to shut down on Friday, despite it being one of the busiest days in the week for the store.

Saed Al-Shamy, a tourism company worker, told MEE they were asked to close for business between 10-12 November.

A member of a private rowing club in Giza also told MEE the facility will not be accessible on Friday despite them having confirmed bookings.

“Although we made a reservation, the club told us they will be closed after receiving orders from the police,” said the club member, who did not give a name.

Staff members of the Cairo International Film Festival, set to start on Sunday, were given Friday as a day off, two sources told MEE.

“All staff members received the day off on Friday based on security orders, especially due to the critical location of the festival’s headquarters,” a staffer with the festival said.

The festival, set to take place between 13-22 November, will be hosted at the Cairo Opera House, a 20-minute walk away from Tahrir Square.

More than 600km south of Cairo, a cafe worker in Luxor also reported similar orders for him to shut down on Friday.

“A lot of people are on edge in Luxor, as hundreds of houses have been demolished in the last year, and many want to participate in the protests,” Qassem, who only gave his first name, said.

Many on social media said similar orders were made to restaurants, cafes, shopping centres, and cinemas.

Egypt has witnessed a brutal crackdown on dissent since general-turned-president Abdel Fattah el-Sisi seized power in a military coup in 2013.

Under his administration, the government introduced a protests law that rights groups say effectively criminalises protests and gives security forces free rein to use excessive force against peaceful demonstrators.

Since then, thousands of people have been detained and referred to mass trials on charges of violating the law.

In September 2019, thousands took part in anti-Sisi protests across the country, the largest protests since 2013. Security forces dispersed the protests by force and detained thousands, including children.