I’m the father of a trans boy in Florida. ‘Don’t say gay’ is working as intended. 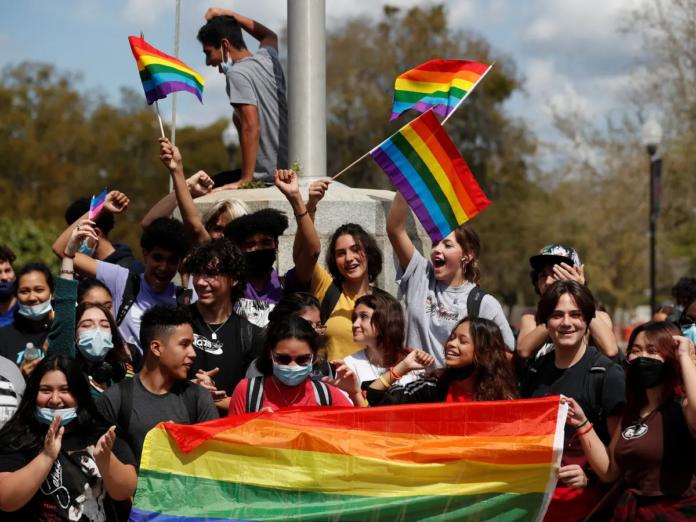 Alberto Cairo, a data journalist and visualization designer, is the Knight Chair in Visual Journalism at the University of Miami’s School of Communication.

Last month, a bearded man yelled this slur outside the Miami-Dade School Board building, which I’d just left after speaking at a meeting. The board had been considering a proposal to recognize October as LGBTQ History Month.

The slur was not directed at me, but I cringed anyway. “Groomer” has found its way into our discourse ever since Christina Pushaw, Gov. Ron DeSantis’s former press secretary, helped popularize the term as a synonym for “pedophile,” and some on the American right began directing it at families like mine.

I walked on. A group knelt on the sidewalk to pray. The man who led it asked God to “save America from homosexuality.”

This man was part of a well-coordinated assortment of extremist and Christian fundamentalist organizations — among them Moms for Liberty, the Proud Boys and the Christian Family Coalition — that had gathered to pressure the board to reject the proposal.

Behind the reversal was Florida’s Parental Rights in Education act — better known by the name its critics have given it, the “don’t say gay” law — which DeSantis signed on March 28. It is one of many proposed or passed by conservative politicians across the country seeking to codify discrimination against LGBTQ people.

In deliberately vague language, the law prohibits “instruction” on sexual orientation or gender identity in kindergarten through third grade and, beyond them, “in a manner that is not age appropriate or developmentally appropriate for students in accordance with state standards.” The key to its power is that the “standards” are ill-defined — moving educators to proceed with extreme caution, to avoid legal entanglements.

Indeed, several speakers at the meeting issued veiled threats to use DeSantis’s law. And school officials were wary. Steve Gallon III, the board’s vice chair, said, “My obligation as an elected school board member is one that has to comply with the law that has now changed.”

Never mind that the only instruction mentioned in the LGBTQ History Month proposal would have happened in 12th grade and was limited to discussion of Supreme Court decisions such as Obergefell v. Hodges. (In what world is it not age-appropriate to teach teenagers that gay people didn’t have the right to marry until 2015?)

I spoke at the meeting because I’m the father of a transgender boy. I wanted to remind the board of a tragic constant in human history that I saw at play again that day — the dynamic by which empathy, tolerance and love become weaker political motivations than disgust, fear and hatred.

I explained how the current moral panic about LGBTQ people is rooted in misguided convictions and unfounded concerns.

The convictions are that there’s something “abnormal” or “degenerate” about LGBTQ people, and that celebrating the diverse ways of being human — to compensate for centuries of silencing and discrimination — is unnecessary or even sinful. Some speakers at the meeting said LGBTQ History Month was an offense to their religious beliefs. One man mentioned “Satanism.”

The concerns are that being gay or transgender is contagious (it isn’t), and that giving LGBTQ issues visibility is part of a “conspiracy” to undermine “traditional” values. One woman asserted that LGBTQ History Month was part of a “left-wing social experiment.”

All that is nonsense. There is nothing unnatural or immoral about my son. He has always been who he is: a normal, loving, beautiful child of nature’s god. He and other students deserve to learn at school that others like him struggled — and continue to struggle — to see their existence and dignity recognized.

The lack of civil discourse was astonishing. People who probably pride themselves on being observant Christians cheered for their allies — this is prohibited — and heckled those they perceived as foes, such as the board’s student adviser, 17-year-old Andrea Pita Mendez.

Despite the rude interruptions, Pita Mendez was able to share: “Our students want this to pass.” Demonstrating more wisdom, grace and courage than many in the room, she said, “I heard many of you speak of the fact that in your generations this wasn’t seen, this wasn’t heard — you grew up in a very different time.”

Her words, sadly, didn’t make a difference. Gallon and other board members, who in the past supported LGBTQ students, surrendered preemptively, capitulating to an increasingly authoritarian governor who is transforming Florida into a laboratory for a national strategy. Instead of fighting back, they chose acquiescence.

Which only proves: “Don’t say gay” is working as intended.

Evolution of Islam in Kazakhstan: How Modern Kazakh Muslims Balance Their Religious Identity, the Soviet Legacy and National Traditions