Archaeologists hail ‘dream discovery’ as sarcophagus is unearthed near Cairo 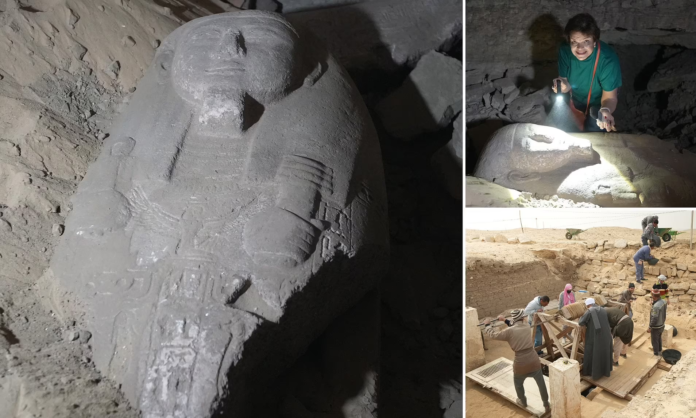 The coffin of Ptah-em-wia has been found in its underground burial chamber at Saqqara, and features in a TV documentary

It has lain within a burial chamber, undisturbed, for thousands of years. Now a remarkable Egyptian sarcophagus has emerged from deep beneath the sands near Cairo, to the excitement of archaeologists, who describe it as a hugely significant “dream discovery”.

The giant granite sarcophagus is covered in inscriptions dedicated to Ptah-em-wia, who headed the treasury of King Ramses II, Egypt’s mightiest pharaoh.

Ola El Aguizy, emeritus professor of the faculty of archaeology at Cairo University, discovered it in Saqqara, an ancient necropolis about 20 miles south of Cairo. Last year, El Aguizy, who heads the archaeological mission at the site, uncovered Ptah-em-wia’s surface-level tomb. Now she has found his underground burial chamber with the sarcophagus, which could reveal more about those who ruled Egypt after Tutankhamun.

At the centre of the tomb’s courtyard, El Aguizy’s team spotted the top of a vertical shaft, which suggested a passage to a burial chamber. But that shaft proved so deep, at 8 metres, that it took a week just to remove all the sand, using a bucket attached to a hand-operated rope winch. El Aguizy then squeezed herself into that bucket and made a dangerous, slow descent down the shaft. At the bottom, she was astonished to find the sarcophagus.

National Geographic cameras captured everything while shooting the latest excavation season for an eight-part documentary series, Lost Treasures of Egypt, which begins in the UK on 2 October.

She said that Ptah-em-wia’s titles listed in the hieroglyphs emphasise his closeness to the king, proving that he had “a very important role in the administration of that time”.

She added that the sarcophagus is inscribed with emblems of deities, including the sky goddess Nut on the lid, covering the chest with opened wings to protect the deceased.

Her team will now study it to uncover the full story of Ptah-em-wia’s life.

Peter Der Manuelian, professor of Egyptology at Harvard University, said: “Saqqara is one of the most important cemeteries, for both royals and non-royals, throughout the millennia of Egyptian history. This Egyptian team has added yet another important chapter to the history of the site.”

Oxford University Press is about to publish Manuelian’s book Walking Among Pharaohs: George Reisner and the Dawn of Modern Egyptology, a biography of America’s greatest archaeologist, who directed many excavations and realised the importance of Saqqara.

Tom Cook, the documentary series producer, paid tribute to El Aguizy and her “fabulous discovery”: “She’s a grandmother, she’s in her 70s and she’s still going out there doing this really quite hazardous job.”

Noting that a piece of the lid had been broken off, indicating that ancient tomb robbers had stolen burial treasures, he said: “These tombs [were] so frequently raided by tomb raiders that there was no guarantee that anything exciting would be down there. So it was only when they reached that final chamber that they realised something spectacular really was there.”

‘Pepsi weren’t counting on a dreamer like me’: the student who sued a soft drink giant for a $23m fighter jet

Enemy within the Kremlin Gates. FSO gets ready to protect Putin from coup by using priests, hypnotists and political officers