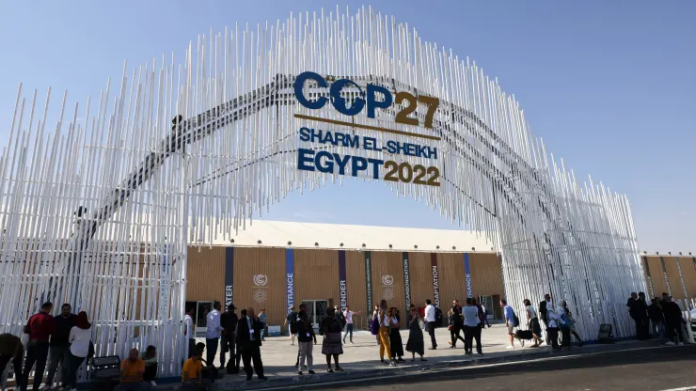 The Red Sea resort town of Sharm el-Sheikh is widely known for its sheltered sandy beaches, coral reefs and luxury hotels. It may, perhaps, also become known for the growing list of infrastructure woes at this year’s flagship U.N. climate summit.

Around 35,000 delegates from nearly 200 countries are expected to convene on the southern tip of Egypt’s Sinai Peninsula to discuss collective action on how to tackle the climate emergency.

The two-week-long event, known as COP27, has encountered several problems in its opening days.

A sewage pipe on Wednesday evening appeared to burst near the exit of the Blue Zone, a U.N.-managed space where negotiations are held. The leak sent streams of foul-smelling liquid waste down one of the venue’s main thoroughfares, prompting many to attempt to hurdle the flow in a bid to catch a bus back to their hotel.

Earlier in the week, attendees had complained about a lack of food and water, restrooms frequently running out of toilet paper and lengthy queues to purchase eye-wateringly expensive snacks while standing in the African sun.

Taken together, the issues raise questions about the planning for an event of this scale.

“Logistics seems to be a thing here. It’s not for the faint-hearted,” Lena Thiede, an environmental and climate policy expert at German investment firm Planet A Ventures, told CNBC from the Blue Zone on Thursday.

“I was struggling to get from the Blue to the Green Zone. I thought it was more connected, these two worlds, and I found them really very separate, and it was hard to get there,” Thiede said.

Egypt’s COP presidency and the United Nations Framework Convention on Climate Change were not immediately available to respond to a CNBC request for comment.

Sarah Garry, executive officer at the British Society of Soil Science, spoke to CNBC on Thursday as she waited in line to order a vegan burger for lunch. “It’s the only place that sells anything vegan or vegetarian. At least I think so, I haven’t found anywhere else yet.”

Garry, who arrived mid-afternoon on Wednesday and planned to stay through to Saturday, said she’d had a couple of experiences of not being able to find the restrooms in some of the Blue Zone buildings despite following the signs.

“Some of the infrastructure is a bit lacking. Even [with] signage, I can’t find my way anywhere. So … the sign to the toilets, you go there, and it doesn’t exist,” Garry said. “I can’t understand the map and it’s not that I’m not very good at map reading. I did my Brownies [Girl Scouts] … but the maps just don’t make sense,” Garry said.

“I think we’re all here for the right reasons, but it would be really helpful to have some of that basic infrastructure stuff just to allow us to be more involved.”

‘I couldn’t do two weeks of this’

A short walk away at a separate food stand, Philip Mann of Climate Impact Partners told CNBC that by arriving on Monday evening, he’d missed some of the problems with a lack of food and water during the opening days of the summit.

Nonetheless, Mann said he came prepared with some provisions from Britain’s Luton Airport “just in case.”

“You know what, despite the slightly odd arrangements for paying and collecting, it has been OK. I think this is the 8th COP that I’ve been to, and this is fairly standard,” Mann said on Thursday.

“My big issue is with signage; it is the biggest catastrophe,” he added. “I’ve spent 20 minutes just trying to find out where the hell I’m going.”

When asked how long he was planning to stay for the conference, Mann replied: “Just until Friday … I couldn’t do two weeks of this.”

Michael Barbara, director of business development at New Forests, a global investment manager of nature-based assets, was diplomatic about the problems COP27 had encountered to date and offered some advice to those attending through to Nov. 18.

“I know that they are facing some challenges but hopefully they are trying to respond to that and improve on those areas,” Barbara said.

“Any COP is difficult to get around because they are big, right? My advice to people is to walk around the whole place once, learn the lay of the land, and after that, you’ll be fine — unless you’re directionally challenged then you might have a few [issues],” Barbara said.

COP27 will be a turning point in international climate action: Egypt’s FM